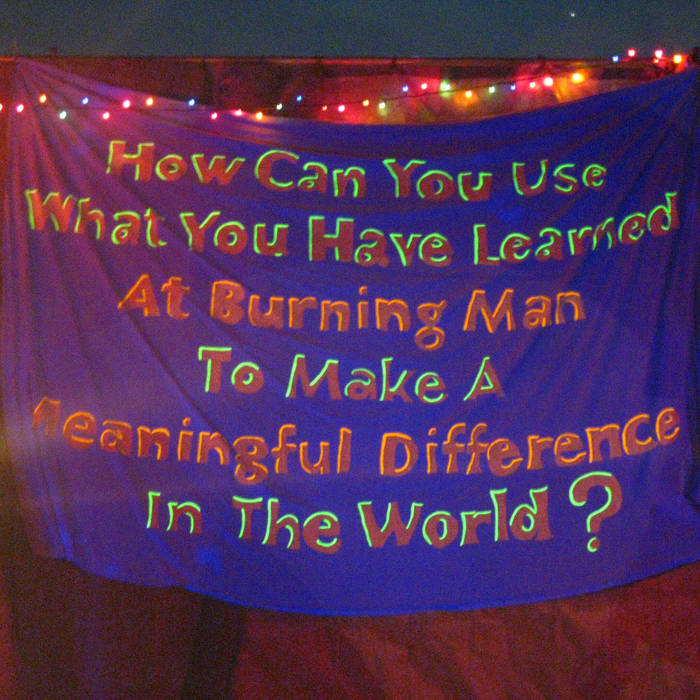 My first public science lecture, "Does Evolution Have A Direction?," and the ensuing panel discussion took place at Entheon Village's Heart Structure as a part of a series of evolution-themed discussions at Burning Man 2009.

Below is contact information for each of the panelists, followed by notes on the discussion. If you have any questions that are not addressed here, please contact me and I will amend this to include additional research resources and citations. Enjoy!

Michael Garfield - michaelgarfield@gmail.com
I am interested in evolution as a process of self-organization that operates beyond our conventional definitions of "living systems." Linguistics, psychology, chaos mathematics, quantum physics, cybernetics, and other more occult disciplines all have important insights into the nature of life that I am working to integrate with more common contemporary perspectives on evolution. The history of life is too big a story to be told from within a single science, so I've made it my mission to specialize in synthesis.

Jason Hodin - seastar@stanford.edu
I'm an enthusiast of bugs, fungi and nearshore creatures. I'm especially interested in life cycle transitions as key innovations in evolution as well as critical life stages across kingdoms. Although I don't aspire to parasitism, I do try to emulate the "hypermetamorphoses" that characterize disparate paraites with multiple hosts. In our deep ability to undergo iterated metamorphoses resides hope for the species and, hence, many of our planet's threatened residents.

Cory Bishop - cbishop@stfx.ca
I am an evolutionary developmental biologist. I study animal reproductive cycles and focus on the molecular control of environmentally induced metamorphosis among marine invertebrates. I am also interested in reconstructing the origin of evolutionary novelties, including the vertebrate head.

Ruben Valas - drnknmstrr@gmail.com
I focus on the molecular traits that are universal in all cells, and how that confirms one of Darwin's major predictions. Some things have not gotten more complicated in 4 billion years, such as the genetic code. I guess you could say evolution is a process of increasing complexity in the least complex way possible.

- The "sun eater" I mentioned is named Hira Ratan Manek, and NASA denies any involvement with him.
en.wikipedia.org/wiki/Hira_Ratan_Manek
As of right now, the best evidence I have for the veracity of his claims comes from my own experiences in sun gazing and energy increases...although I have not pursued his practices to a point where I have been able to abandon solid foods, nor do I know anyone who has, so take this with a grain of salt.

- The "hundredth monkey effect" is based on a story that has been seriously called into question:
en.wikipedia.org/wiki/Hundredth-monkey_effect
In spite of the likely fictional nature of the hundredth monkey itself, there is considerably more room for debate as to the actual existence of the effect. Rupert Sheldrake's research provides some of the strongest support, but his reputation is wildly inconsistent throughout the scientific community (as any pioneering fringe scientist's OR genius eloquent crackpot's would be...so again, I urge you to study these things yourself and see where the evidence leads you).
sheldrake.org

- The term "biomimicry" does not mean an individual organism's imitation of another individual organism's observed behaviors, but the evolutionary process by which one organism evolves to look like another...often a harmless organism evolving to look like a different, poisonous or predatory creature. The correct term for what they are discussing is, simply, imitation or learning.

- Jason's notion that whales are an example of evolution "reverting to the past" is incorrect. Recent molecular studies support the theory that evolution does not move in reverse. Even if mutations in a gene are reverted base pair by base pair to their original configuration, the gene product's environment (other genes and their products, as well as other molecules) is different from the "ancestral" environment and so the same protein will perform a different function. Instances such as the recent experiments to "retro-engineer" a dinosaur by playing with chicken DNA, for example, are simply turning ON old genes that have been turned OFF for millions of years (the genes that code for teeth and scales, for example), and result in something new. This research into the "ratcheting" nature of the evolutionary process suggests, to me, that there is after all a strong argument for evolutionary directionality – that "you can never step in the same river twice" because the interplay of constraints constantly creates new constraints, many of which call for more complex responses. The ocean that whales "re-entered" was a dramatically different one than the one their distant ancestors had abandoned in favor of land. This isn't an argument against atavistic adaptations, however. And in fact, Corey says this, later: "You never recreate entirely an ancestral scenario."

- Cory says he's unaware of neuroepigenetics research reviving some of the ideas of a Lamarckian view of evolution. The best place to get started with a study of the effect of mental states on genetic expression is with the work of Dr. Bruce Lipton, who has written numerous books on this subject for a lay audience. In researching the literature behind this, I discovered that the term actually used by this field of inquiry is "psychosocial genomics," for those inclined to conduct an internet search. According to the National Institute of Health ( www.ncbi.nlm.nih.gov/pubmed/12629875 ):

"This paper introduces the new scientific discipline of psychosocial genomics as an emerging area in the foundations of mind-body medicine. Psychosocial genomics brings together a variety of interdisciplinary fields ranging from studies of stress, psychosomatics, psychoimmunology, and psychoendocrinology to the deep psychobiology of creativity, optimal performance, dreaming, art, ritual, culture, and spiritual life. The focus of psychosocial genomics is on creating new models of how the levels of gene expression, neurogenesis, and healing are interrelated as a complex, adaptive system with the levels of human experiencing, behavior, and consciousness. Ongoing research in psychosocial genomics is presented to illustrate how this complex adaptive system operates in the theory and practice of alternative and complementary mind-body medicine and psychotherapy on all levels, from mind to gene."

- With respect to the Red Queen Hypothesis...again, it's more complex when you include the context. Just because the two organisms (in this instance, a caterpillar and the parasitoid wasp that lays its eggs in the caterpillar) continue to evolve new ways around each other's adaptations and thus have "arrived at a standstill" with respect to one another doesn't mean that evolution is going nowhere. Every one of their adaptations stands to complexify the ecology as a whole, because it alters the environment of all other organisms in the same biome.