William Irwin Thompson on The Horizons of Planetary Culture 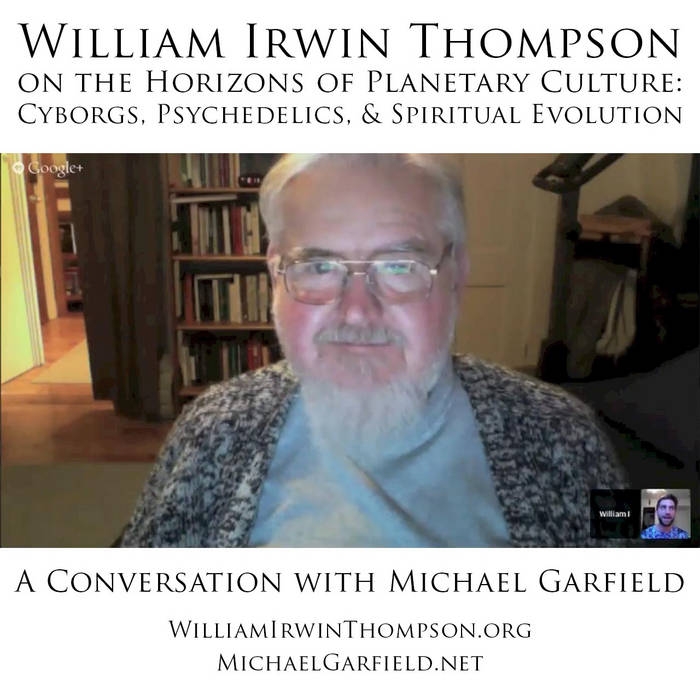 “Were you to attempt to read all the books Thompson refers to before [absorbing his work], you would likely forget why you were reading them before you finished them. Thus unprepared one must ride the whirlwind with Thompson, holding on for dear life as he escorts us back and forth over ten millennia, integrating the warp and woof of myths into the tapestry of our flying-carpet time-machine as we go.”
– Bobby Matherne

One of the best conversations I've ever had: My second rap with poet-philosopher William Irwin Thompson, on the transformations of self and society in the collapse of civilization and the emergence of a planetary culture - cyborgs, surveillance, and psychedelics in an age of paranoid apocalypticism and inspired new visions for our species.

Get ready for a wild one, folks...

Some of the topics we covered in this dialogue include:

• The disappointment of 2012 & each generation's coping with the disillusionment of epochalism/apocalypticism;
• Douglas Rushkoff's book Present Shock, "fractalnoia" & conspiracy theories, the Deep State, media warfare, paranoia as a necessary step along the path of spiritual evolution;
• The interplay between the growth of a global electronic economy and the awakening of the collective unconscious;
• Intelligence as a primary function of entropy to maximize freedom in chaos, fear & intelligence as two sides of the same phenomenon;
• Prokaryotic vs. eukaryotic strategies, the bacterial bioplasm vs. sexuality & individuality as complementary archetypes;
• The pop mythology of the lone genius vs. the reality of collective intelligence;
• Fractalnoia & Autistic Spectrum Disorders, possible relationship between "intense world syndrome" theory of Autism & the psychological impact of electronic communication media;
• Sloughing off the Surveillance State & making it an art object, Big Data/Quantified Self revolutions in the emergence of a new level of personal psychology, Buddhist Geeks & Mindful Cyborgs;
• Psychedelics and Yoga as alternative spiritual paths, LSD's legacy of both burnout and the inspiration of paradigm-changing scientific discoveries;
• Richard Doyle on the exegesis of Philip K. Dick, discussion of how revolutions are colonized by existing power structures, Jan Irvin's argument that the CIA created psychedelic counterculture;
• Isolation/solitude/privacy as prerequisite to the classical visionary/mystical experience, an opportunity eroded in the hyper-stimulation of electronic culture;
• The self as a collective, the "entelechy" as a colonial organism composed of elemental entities & of which the human as defined by modernity is only a part, wearable computers & medical nanobots as "machines in the ghost" with both light & shadow aspects;
• The perils of being an early adopter and the importance of maintaining a critical attitude toward new technologies;
• How Buckminster Fuller & Marshall McLuhan were destroyed by celebrity, the related genius and tragedy of Terence McKenna;
• The liminal spaces of festival culture as a social equivalent to the mystic isolation of individuals in classical wisdom traditions (e.g., Burning Man as an island population, rapidly evolving at a distance from the main population);
• Post-tribal/rule-based sports moving beyond "war in peacetime" toward the individualized rejection of corporate culture, improvisational solo extreme sports as a resurrection of mystical privacy;
• The etherealization of currency (e.g., Bitcoin, Dadara's art-as-money projects), of marriage (e.g., polyamory, nonlocal monogamy), & of other cultural institutions;
• "Wissenkunst" or "knowledge art" as a new art form emerging in post-academic remix culture, "standup philosophy" as an improvisatory approach to the university lecture in the same sense that post-religious spirituality evolves from religion and jazz evolves from classical music composition;
• The critical importance of failure to transformation & of stigma/social exclusion in the creation of revolutionary figures.

Some Bill Thompson quotes from our conversation:

"[The media ecology of exopolitics] is a great group mind, a coral reef dreaming while it is awake."

"I don't NEED to take acid...I got hypercalcemic once on just too much Tums."

"At a certain point, I became sensitive [to the fact] that I am a COLONY..."

"Generally, by the third generation, they've lost the vision."

"Failure is very critical in the transformation."